Home»About Us»Blogs»Can I Use Rock Salt in my Water Softener instead of Tablets?

Can I Use Rock Salt in my Water Softener instead of Tablets? 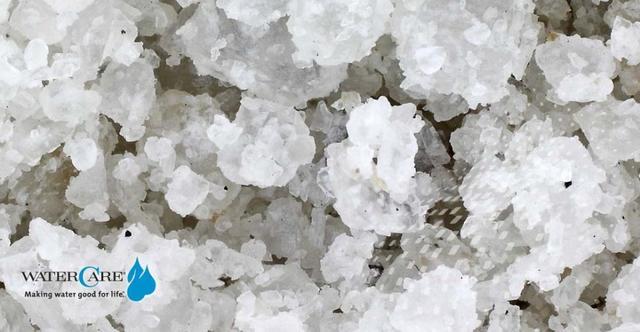 Water softeners are built around the basic principle that the hard water minerals in your water, like calcium and magnesium, can be exchanged with sodium from salt to create soft water. Although that makes the whole process sound easy, not just any salt will do for a water softener’s brine tank. You might think, isn’t all salt the same? No, and there are a few reasons rock salt is not an option for your water softener.

What is Rock Salt?

First off, it is important to understand what rock salt is. Rock salt, or the kind of salt found in the ground, is not pure salt. Although it would taste salty if you licked it, you shouldn’t lick or eat rock salt. Sodium Chloride, the scientific name for salt, is the majority of what makes rock salt, but it carries a lot of other minerals with it. Things like sulfates, halides, borates, and other contaminants are present in rock salt making it dirty, cloudy, and messy.

Consider the appearance of Himalayan or Pink salt. These salts are rock salts that get their pinkish or salmon-like color because of the other additional minerals in them, usually iron. While these salts are often cleaner than rock salts from other parts of the world, but it is their impurity that makes them look special. These unique rock salts are edible because the iron is within safe levels according to government-regulated standards. Still, they are not clean enough to use in a water softener, and are usually more expensive per pound than other salts, so be sure to keep it out of your brine tank.

Many parts of the United States use rock salt to melt ice on roads and sidewalks during snowy parts of the year. This salt is often called ‘road salt’ instead. It is cheaper than other salts, but that is largely because it’s dirtier. Road salt doesn’t have a lot of purity standards to live up to, so the raw salt may carry other minerals, but it’s the dirt, sand, gravel, and other contaminants often found in it that disqualify it from water softener use.

The Problem with Pellets

All a water softener needs is pure sodium chloride, but many salts being sold include additives which also affect the salt’s purity. Water softener salt is often pressed and glued into pellets, blocks, bricks, or other shapes. Although the salt used to make salt pellets and the like is a high-quality salt, adhesives are usually mixed into it so that when it’s pressed into a shape, it holds that shape. Pellets and salt blocks are marketed as water softener salts, and other manufacturers may recommend them, but they will eventually cause a problem. The adhesive that holds compressed salts together remains in the water softener system, slowly building up over time. As it collects on the bottom of the tank and other surfaces, clogging can become an issue. Reduced efficiency and clogging can result in expensive repairs and servicing. Avoid these issues by avoiding salt pellets, blocks, and other shaped salts.

There is one salt that is held to a higher standard of purity, and that is Solar Salt. Often referred to as solar crystal salt, solar crystals, or crystal salt, this kind of salt forms its own natural shape. The translucent, glass-like white mineral may still look like a rock, but it is too pure to be considered rock salt.

This salt gets its name from the process used to produce it. Since most of the water on the surface of the earth is loaded with dissolved salt, solar salt crystals can be made by drying salt-water in the sun. As the water evaporates, and the heat of the sun speeds the process along, the sodium chloride is left behind. This provides a cleaner, less contaminated source of salt than what can be dug out of the ground. As it dries, it shapes into crystals, but it isn’t ready for packing just yet. Other impurities are washed off, then the salt is ready for packaging. Most solar salt is made from water from the Great Salt Lake in Utah, one of the largest, saltiest lakes in the world.

Solar salt is the ideal fit for water softeners because it has sodium the softener needs with the lowest potential for leaving behind contaminants. If you were to use rock salt in a water softener, little bits of sand and gravel would probably end up sitting at the bottom of the brine tank. This could build up until the tubes that handle the water could get clogged up or pump dirty water into the softener tank. If this happens, the entire system may be affected. Water softener salts that are molded to form a shape, also include adhesives that can build up in your system. Aside from operating less efficiently and adding new contaminants to your water, the whole unit might fail with these impurities building up inside your equipment. Don’t cut costs by buying low-quality salts now only to spend far more when your softener becomes ineffective. Invest a little more now with high-quality solar salt so you can enjoy soft water and peace of mind for many years to come.

If you have any questions about the proper salt you should be buying for your water softener or conditioner, contact us today and learn more!